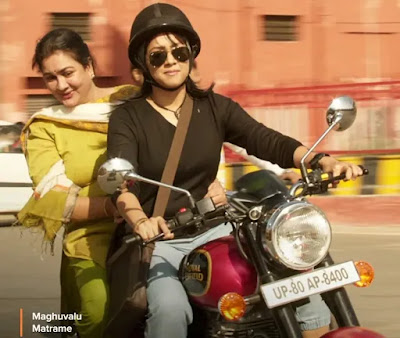 Maguvalu Matrame is the Telugu comedy drama film written and directed by Bramma. The film features Jyothika, Urvashi, Bhanupriya, and Saranya Ponvannan in the lead roles, while Nassar, Livingston, Gokulnath, and G. Marimuthu play supporting roles. The Story line of  Maguvalu Matrame comes with three female school friends who reunite after 38 years, despite the pressures put upon them by the men in their lives.

Aha OTT is providing unlimited entertainment to the Telugu audience by taking the film rights of other languages. This digital platform has released more than 25 films during the Lockdown and most of them are Telugu dubbed Tamil and Telugu dubbed Malayalam movies. However, these movies are Blockbusters and Super Hits in other languages.

✅ What is Maguvalu Matrame Release Date?
The movie released on Aha on 11th September, 2020

✅ What is Maguvalu Matrame Full Movie Story?
An independent documentary filmmaker takes her mother-in-law to reunite her with her school friends on a surprise trip to rejuvenate themselves from patriarchy and male chauvinism..

✅ How is Maguvalu Matrame Movie?
One of the best entertainers in recent times. You can watch this movie with Family and Freinds.