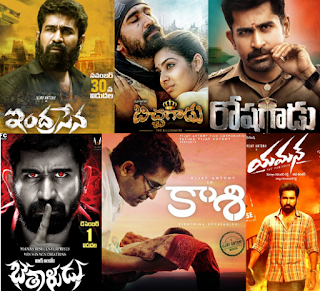 Vijay Antony started his film career as a Sound Engineer and Music Director. Later, due to of his interest in acting, he played as a main lead actor in Naan (2012) which is released in Telugu as Nakili in 2013. However, he got famous in Telugu states with the movie “Bichagadu” released in 2015. Soon after the overnight stardom in Telugu he started releasing his movies in Tollywood and many are successful too.

Below are the list of Telugu dubbed Tamil movies of Vijay Antony from 2013 to till date. And, most of the films are successful and worth watchable.

Nakili: Nakili is one of the best Thriller movie of Vijay Antony in Telugu. And, this is one of the most underrated movie till date.

Dr Saleem: Dr Saleem is a successful Action Thriller movie in Telugu. The movie has got more viewership in Telugu Television channels.

Bichagadu: The first Blockbuster movie of Vijay antony in Telugu. This movie has collected over Rs.15 crore in Telugu itself. Moreover, the songs and music album of Bichagadu is a big Hit.

Bethaludu: This is one of the worth watching movie in Vijay Antony Telugu Movies List and successful too.

Yaman:Yaman is an interesting concept of a political game. A worth watchable political thriller movie.

Indrasena:Vijay Antony played dual role in this movie as twins. The movie has a good story line and strong hard-hitting family emotions.

Killer: The movie has not reached the expectations of Audience. But, it is one of the finest Thriller movie of 2019.