Skip to content
Balakrishna Highest Grossing Movies Box Office Collection Records: Balakrishna is one of the top actors in Tollywood and his many of his films has performed well at Box Office. His movies like Samarasimha Reddy (1999), Narasimha Naidu (2001), Chennakesava Reddy (2002) are the biggest movies of the years. And, many of his movies were ran for 175 days, Silver Jubilee, Golden Jubilee days and those records are still unbreakable. 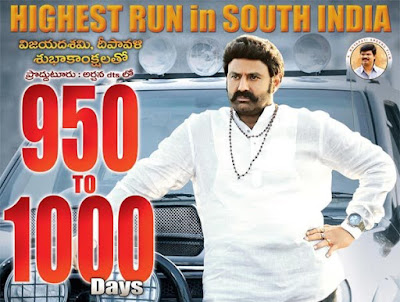 Due to of the continuous Hits every year from 1989 to 2002, He is regarded as Box Office king. Moreover, he has become the trademark for Factionism movies after the blockbuster hits of Samarasimha Reddy (1999) and Narasimha Naidu (2001). If you are checking for the Highest Grossing movies of Balakrishna, then you can refer the below table.

If we compare the Box Office collections of movies like Samarasimha Reddy (1999), Narasimha Naidu (2001), Chennakesava Reddy (2002) to the present days, they have made around Rs.100 crore at Box Office in those days.

His 100th film, Gautamiputra Satakarni has collected a Total Worldwide Collection of Rs. 80 Crore. This is the highest share of Balakrishna movies till date. Following, movies like Legend, Simha has collected a decent figure and declared as Blockbusters.